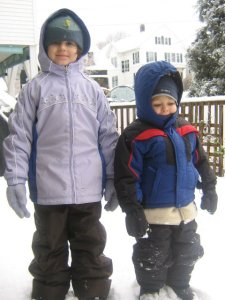 1. After you spend 20 minutes stuffing your children into their five layers of winter clothing, hats, mittens, and boots, they stay outside for exactly 2.2 minutes? And then after peeling them back out of it all, leaving a puddle of melted snow and ice on the rug (in which you step in your socked feet), they ask to go back out?

2. Your husband unexpectedly brings home a cheesy, gooey, yummy, pepperoni-free (miracles can happen) pizza half an hour before you leave for a Christmas party that includes food for which you have already (over)paid?

3. Daughter could be playing with anything, let’s say something as uninteresting as the can opener, and Son will scream that it is his, so you try to distract him with, say, a wooden spoon; dropping the can opener, Daughter will yell that no, the spoon is hers, making Son once again focus on the spoon; so, you give them both wooden spoons, which they immediately crack over each other’s head?

4. A Christmas ornament that somehow did not make it into the storage box last January 6th and has been hanging around all year, its location known even through a move, is no where to be found when you put up the tree? And with 100% certainty you know it will magically reappear once the Christmas box is back in storage, thus starting the process all over again?

5. In the same mail as you receive a surprise Christmas check from your grandmother, you get a surprise bill for the exact same amount?

6. Son’s colon decides to empty itself in the most pungent, leak-potential way after you have just wrestled him into a clean diaper, clothes, snowpants, jacket, and boots, and you are already running 10-minutes late?

7. Children sleep like the dead through 1/2 hour of an eee-eee-eeeing alarm clock on school mornings but are awake and bouncing at 6AM on the weekend?

8. Children begin the I-really-need-a-nap-whine three hours earlier than usual on the very morning you were psyched up to go Christmas shopping, leaving you adrift and in denial that you could use the time to finish cleaning the kitchen (and so you write a pointless blog instead)?