This is a post written a long time ago. OK, only seven years, but it feels like a lifetime ago that my kids were watching these types of cartoons. My now-almost-3rd grader was just a baby!

I’m re-posting because I’m reminding myself that before I wrote for a living I used to write for fun – and could be funny too. This is the second of a bunch of posts I plan to reincarnate over the next few weeks. 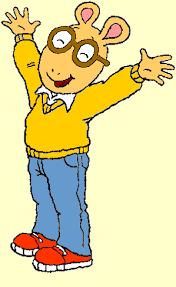 Why did the rabbit cross the road?

Because he’s afraid of a squirrel.

Yeah, I don’t get it either.

Can someone please tell me why a rabbit, one that wears clothes, goes to school, and watches TV would be afraid of the squirrels in the back yard, and furthermore, why aren’t these squirrels also wearing clothes and conversing at the library about their homework with their fellow rodents? What kind of hierarchy is this where not all rodents are created equal?

I’m talking about the PBS show ‘Arthur’. In this cartoon world it appears some animals have evolved beyond others, even those who in the real world, are of a similar species. But what’s even more confusing is the episode where Arthur the aardvark – yes, an aardvark – who wants a pet takes a dog-walking job to prove he’s up to the responsibility of dog-ownership. Now consider that one of Arthur’s gang is also a dog. If you use this reasoning, in Arthur’s world, a human might be seen walking another human on a leash and scooping up its poop in a plastic bag.

I read a book to my daughter the other night where a pig, a sheep, and a cow, all wrapped up in their best winter coats, enjoyed a sled ride driven by… a horse! A human harnessed to the sled might be more logical, but a horse? What audacity! The horse is one of the noblest creatures in this creation and some author has deemed it appropriate to demote him as a servant to a pig.

Now, I could draw a political comparison between these disparities in the cartoon-animal world with that of the poor vs. rich or developed vs. third world. But I won’t. I’ll just continue to be amused and bemused by the rat, rabbit, monkey, aardvark, and cat living and learning in harmony while their squirrel and bird cousins peer wistfully in their windows, cartoon tears in their little cartoon eyes, wondering when it will be their turn.