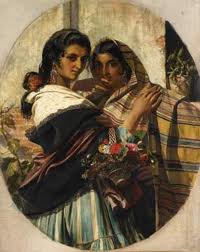 Once upon a time two little girls were born. The one with flaming red hair came fast, her first cries loud and furious. The midwives handed the wailing child to her mother, who gazed upon her and said softly, “Child, you must be not carry on so, the world can be a dangerous place for those with such a voice and will. I will call you Aphrodite.”

And as the mother tried to soothe the babe at her breast, new pains suddenly twisted her womb and she cried out, “There is another one!”

While one midwife rocked the first-born girl, the mother strained. This babe did not want to relinquish its watery circle of warmth, but after many hours a second girl-child was finally born. This dark one did not cry, and her night-sky eyes deepened as if she were contemplating her place in this new world. Her mother held her close and whispered in her ear, “That’s right, Quiet One, you will do well in this life. I will call you Hestia.”

As the girls grew they were never apart, even sharing a pillow as they slept. While Hestia hugged her arms around her own body, Aphrodite clasped her sister to her side. During the days they played, Aphrodite twirling and singing, sometimes stamping and shouting, while Hestia, crouching on the ground stirring pots over an imaginary fire, sang softly to herself. The adults smiled at Hestia and shushed Aphrodite and tried to still her.

One day when the sisters were twelve, Aphrodite was dancing by the gate. Her fiery tresses and bright eyes caught the attention of a passing gentleman. She quickened her step and whipped her skirts. Her eyes flashed under her long lashes. The next morning Hestia awoke alone. Hestia cried for the loss of her sister but found comfort in the deep silence which now wrapped her in its arms. That day she left her imaginary pots and pans and retreated to the encircling warmth of the kitchen. Here she cooked and cleaned and watched and listened. Although no one would speak Aphrodite’s name, Hestia felt in her heart that her sister was somewhere near, and safe, cradled even.  Within the hearth she kept a fire burning bright to guide her sister home.

While she worked Hestia sang, a soft chant low in her throat. Honey bees gathering to dance on the garden of daisies, zinnias, and foxgloves outside the kitchen door echoed her song. A pair of doves arrived and each morning crooned their melancholy lullaby as Hestia sat in the lemon sun of early day. Then the swallows came, swooping and looping, weaving unseen fabric in the sky. As the days went by Hestia’s song became stronger and deeper.

And then one day, as her voice carried up into the trees and pulsed down into the earth, she felt her whole body began to sing. The air around her resonated and glowed. And suddenly there she was. Drawn by the power of Hestia’s voice, Aphrodite rose from the well that stood not far from the kitchen door. Finally freed from the damp earth where she had been exiled, she came towards Hestia with arms outstretched. Wrapped once again in each others embrace, their hearts and voices merged in song.